Last Saturday as part of the 2009 Symposium on user generated content, interaction and design I had the opportunity to road test my installation piece ‘Journey through a burning brain’ which until I was forced to choose a title for the printed materials was previously known as my ‘youtube TV installation’. 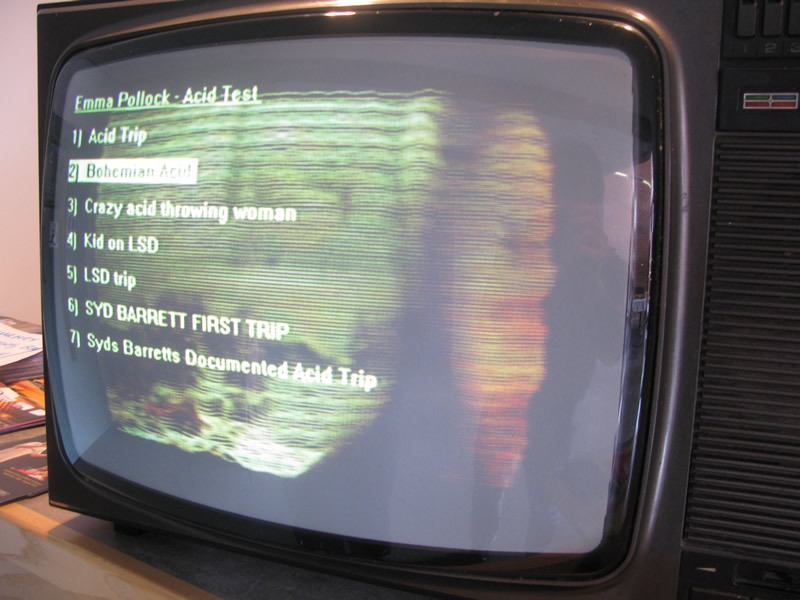 Similar to my previous radio piece I chose an old piece of hardware to form the interface which I could then go about subverting. This time a 1970’s Hitachi TV that I found languishing under the stairs when I moved into my flat was put into service along with a gigantic space age TV remote that I found in Maplins. On reflection the space age remote might go next time around as it sort of breaks with the conceit of interacting with an aged decrepit telly.

The central idea behind the piece was to use the content of youtube to provide a navigable database of content which could be reinterpreted through algorithmic cut ups. Again as with my radio piece it’s about the idea of browsing, channel hopping, surfing, constantly hunting through media for the next thing that will satiate us for a moment.

Technically the installation consisted of three laptops running MaxMSP/Jitter, my IR ardiuno box, the telly and remote.  The first laptop took care of downloading, transcoding and analysing videos from youtube, the second receiving and interpreting the user’s clicks and re-sequencing and playing the audio while the third played the videos through my Rutt Etra jitter synth and visualized the youtube database.

It was well recieved at the symposium but I feel that the remote control button’s mapping to the indivual features of the piece needs a little work before I find a gallery where it can sit for a week. I’m now hoping to move the piece online and use google’s youtube API to automatically repost my algorithmic video mashups and then incorporate video rating/play counts as a fitness test for genetic algorithms controlling the sequencing and sample selection.

6 Responses to “Journey through a burning brain”